Subscribe to 'Daily REE'!
Receive our instant alerts
Human Rights
Human rights have been, since approval of the Universal Declaration on Human Rights in 1948, the international standard which guarantees the recognition of individual liberties and dignified living conditions for all people in the world. Red Eléctrica maintains an explicit and public commitment to respect, uphold and promote Human Rights in the execution of all its activities, as set out in the Code of Ethics and Corporate Responsibility Policy of the Red Eléctrica Group.

Red Eléctrica has a Human Rights Management Model that structures and systematises the Company's actions to protect, respect and remedy any risk related to Human Rights. This management model follows the methodology defined by the Guiding Principles on Business and Human Rights, proposed by the United Nations (UN), and is developed in the following elements: 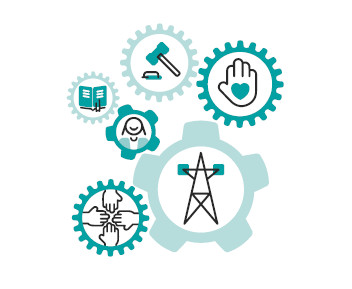 The Red Eléctrica Group maintains an explicit commitment to the respect and promotion of Human Rights in all territories and countries in which it operates, with special attention to vulnerable groups, as set out in its Code of Ethics. This commitment is reinforced by the principles and guidelines contained in the Corporate Responsibility Policy of the Red Eléctrica Group.

In developing these commitments, Red Eléctrica has taken into account those human rights internationally recognised in the Universal Declaration on Human Rights, the International Covenant on Economic, Social and Cultural Rights and the fundamental Conventions of the International Labour Organization.

In addition, in order to extend the principles of corporate responsibility throughout the supply chain, this commitment is extended to suppliers through the Supplier Code of Conduct, which establishes the duty to respect the principles of the Universal Declaration on Human Rights and the Covenants that derive from it. With the acceptance of the General Conditions of Contract, included in all purchase orders, our suppliers undertake to comply with the provisions of the Code of Conduct, and this can be verified through by conducting social audits.

Since 2013, Red Eléctrica has conducted periodic due diligence analyses to identify the risks associated with its activity, both direct and indirect, in the field of Human Rights and encompasses and is applicable across all the companies of the Group. The result of this process shows that the Company has a low risk level and that it applies the appropriate controls for its management, and, therefore, it has not been necessary to implement any remediation action. The identification of risks by means of the supply chain impact matrix is used to complete these analyses.

The Company maintains an approach focused on control and ongoing improvement through the undertaking of actions that enable the prevention of possible infringements as well as the search for solutions and the remediation of any infringement in the event it should occur. The Company is subject to internal and external audits in this area and conducts social audits among its suppliers.

In 2021, the company has initiated a project to improve due diligence mechanisms for the identification and assessment of human rights impacts. The scope of the project includes updating the catalogue of potential impacts by activity, among other tasks. Until the completion of this project, the current impact mapping corresponds to the risk catalogue drawn up in 2013. In addition to the human rights covered by the previous policies and processes this new project tackles more entrenched issues of discrimination within the coverage of the due diligence process. It will also allow the company to conduct a new human rights assessment in the coming months according to a more robust methodology.

Under the same scope of the new 2021 project mentioned above, the company has launched a project to identify and assess the human rights impacts of equality and non-discrimination in the workplace associated with its supply chain.

Red Eléctrica makes the whistle-blowing channel available to its stakeholders as a formal mechanism to respond to enquiries and grievances related to Human Rights.

In addition, the Company has other channels of communication with its stakeholders, where they can communicate and express their concerns regarding any infringement of Human Rights. These channels are:

In addition, Red Eléctrica promotes and maintains a permanent relationship with the local areas in which its facilities are located.

Red Eléctrica keeps its stakeholders abreast of the progress made by the Company on Human Rights issues through the Annual Corporate Responsibility Report. It also makes the Annual Ethics Management Report public which includes an analysis of possible grievances received on this matter.

The Company, as a founding partner of the Spanish Global Compact Network, actively participates in human rights actions, sharing good practices and supporting different initiatives, among which noteworthy is the online tool for the implementation of the Guiding Principles on Business and Human Rights of the United Nations.

The Company periodically promotes communication and in-house awareness-raising actions aimed at the employees of the Group.

Red Eléctrica, as a benchmark company in its sector, contributes to the development and progress of the countries and territories in which it operates (currently in Spain, Peru and Chile). Due to the sector in which the Company's activity is encompassed, its exposure to human rights-related risk is mainly found in the field of occupational health and safety of people, working conditions, the supply chain and the impact on the community. The Red Eléctrica Group has policies and control mechanisms to minimise these risks, ensure respect for Human Rights and remedy possible infringements thereof.

The activities of the Company in no case infringe on the Human Rights of any vulnerable group. It should be noted that, although Peru has an indigenous population, there are no indigenous settlements or communities in the area directly influenced by the Group's activities and, therefore, there is no impact on the indigenous population. In its Code of Ethics, the Company undertakes to respect the freedom and rights of ethnic minorities and indigenous communities, as well as to contribute to the development of such groups in those countries in which it carries out its activity.