The Chairwoman of the Red Eléctrica Group, Beatriz Corredor, and the President of the Regional Government of Extremadura, Guillermo Fernández Vara, met today in Mérida with the aim of continuing to drive the green transition process in the region. During the meeting, Ms. Corredor ratified Red Eléctrica's commitment to Extremadura, with projects that will involve an investment of at least 136 million euros until 2024, a figure that will generate more than 1,000 jobs and will contribute 63 million euros to Extremadura's GDP.

Guillermo Fernández Vara and Beatriz Corredor have analysed the projects underway in the region and those that will be executed in the near future, such as the 400 kV Carmonita and Cañaveral substations, aimed at powering the railway lines or the set of infrastructure to be built in the area of Cáceres and its connection with Trujillo, all essential to continue guaranteeing a quality electricity supply in the area and to evacuate the new renewable generation.

The Chairwoman of Red Eléctrica highlighted the Company's efforts - 62 million euros in the last three years - to assist the region in the transformation of its energy model towards a more sustainable one: "we continue to work to strengthen the development of the electricity transmission grid infrastructure in the region so that it is more meshed and resilient, and can integrate the new green power and do so at the pace set by the National Energy and Climate Plan and the Extremadura Energy and Climate Plan". 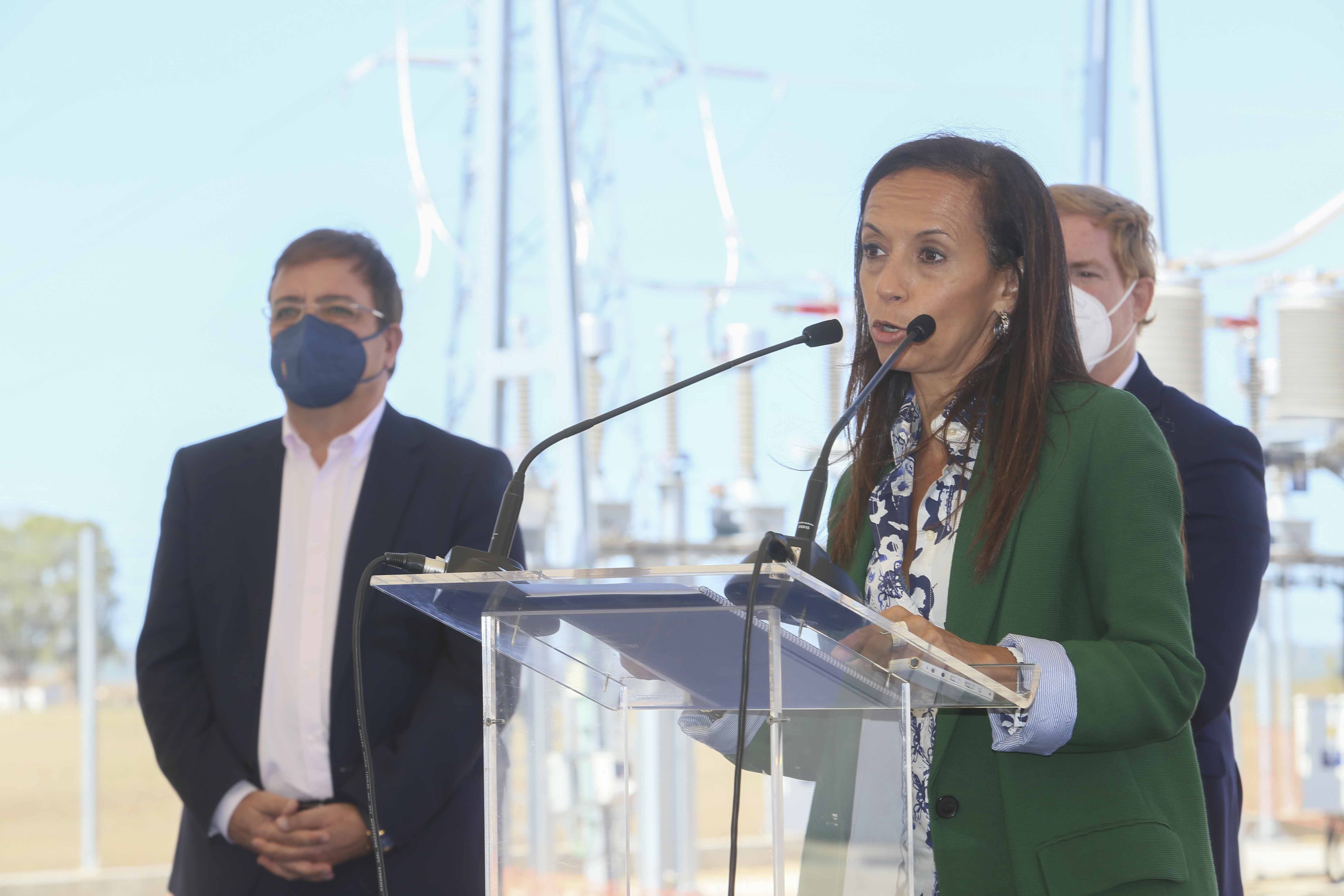 During the speech made by the President of the Regional Government of Extremadura, Guillermo Fernández Vara, at the Río Caya substation, located in the Southwest European Logistics Platform, in Badajoz, he stressed that all the projects that are coming to the region are the result of many hours of work and planning and a great deal of collaboration, which shows that "when we get down to work to do things together, things get done better".

The leader of the regional government explained that this substation is truly unique because the transmission and distribution activities function in total collaboration, sharing the same substation space and because on the other side of the border is Portugal and "where there used to be borders, we are now building bridges, also via the electricity towers".

Extremadura is making progress in the ecological transition process. According to data from Red Eléctrica, the region has the largest photovoltaic power generation fleet in Spain, with 24.1% of the total installed power capacity nationwide. This has been possible thanks to the boost that this technology experienced in 2020, when more than 1.5 GW of new capacity was commissioned.

Strategic projects in the region

The investments in infrastructure that the Company will allocate to the region in the coming years are a demonstration of Red Eléctrica's continued commitment to Extremadura. In addition to detailing the investments planned up to 2024, Ms. Corredor also stated that the Company's Strategic Plan for the 2021-25 period already contemplates a roadmap with which it will continue to develop and strengthen the Extremadura electricity transmission grid in line with the future Transmission Grid Development Planning for the period 2021-2026.

She also highlighted the key role that these investments will play in the economic and social development of Extremadura, as they will not only contribute to strengthening the electricity supply in the region but will also "be a catalyst and a driving force for economic activity and the development of its productive sector." The construction of new infrastructure will create jobs and generate wealth in the region and, therefore, will contribute to the socio-economic recovery of Extremadura after the crisis caused by COVID-19.

During the event, both representatives visited the Río Caya substation accompanied by the Mayor of Badajoz, Ignacio Gragera, as well as the Regional Minister for Ecological Transition and Sustainability, Olga García, and other dignitaries and Red Eléctrica executives. At this facility, located in the province of Badajoz, Red Eléctrica has two new substation bays for the interconnection with Portugal via the double circuit overhead line between Alcaçova and Badajoz. In turn, the substation is also a key element for the deployment of the Southwest European Logistics Platform, a powerful logistics hub that opens up new economic development opportunities for the province.

Both facilities, which have just received administrative authorisation from the Government Delegation for their commissioning, will supply electricity to the industries and companies that set up in the new logistics business park area, some of them, such as Amazon's logistics centre and the lithium battery factory being promoted by the company Phi4Tech, both projects already underway and in very advanced stages and which will contribute to creating a significant number of jobs.

Downloads
PR - Red Eléctrica will invest 136 M€ in electricity infrastructure in Extremadura over the next three years (PDF - 145.8 Kb)