Generation coming from wind power reached 3,160 GWh in June, a value 2.1% lower than the same month last year, and represented 15.2% of total production.

In the month of June, using data available as at 30 June, it is estimated that 32.4% of total production came from renewable energy sources.

51.7% of electricity generation during the month was obtained using technologies which produce zero CO2 emissions.

Generation mix in the month of June 2017 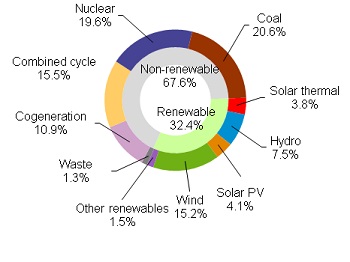