The demand for electrical energy fell 0.6% in May

The demand for electrical energy on the Spanish peninsula in the month of May, after having factored in the seasonal and working patterns, fell 0.6% with respect to the same month last year. Gross demand for the month was 18,607 GWh, a value 2.1% higher than the figure for May 2014.

In the first five months of the year, after having factored in the seasonal and working patterns, consumption was up 0.6% on that of the same period last year. The gross demand for electrical energy in this period was 102,020 GWh, 1.7% higher than in the same period in 2014. 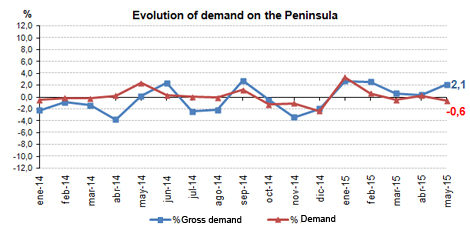 Production coming from wind power, using data at 29 May, reached 4,662 GWh, a value 20.8% higher to that of the same period last year, and represented 25% of the total production.

In the first 29 days of the month, generation coming from renewable energy sources reached 49.9% of production.

65.7% of electricity generation during the month was obtained using technologies which produce zero CO2 emissions.

Generation mix in the month of May 2015 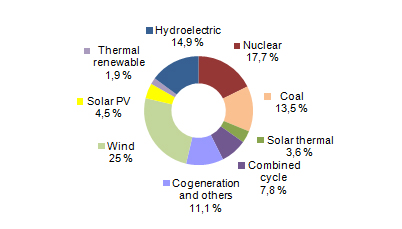 Generation mix January to May 2015 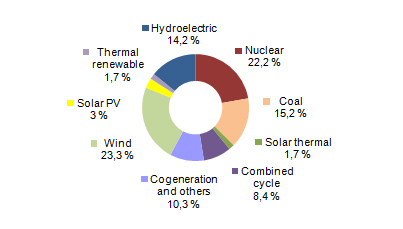