The demand for electrical energy on the Spanish peninsula in the month of December, after having factored in the seasonal and working patterns, grew 1.6% with respect to the same month last year, being the first positive variation in the demand since August 2011, when a growth of 0.3% was recorded. Gross demand for the month was 21,715 GWh, a value 1.8% above that in December 2012.

In the twelve months of the year, and after having factored in the seasonal and working patterns, consumption was 2.2% less than last year. The gross demand for electrical energy in this period stood at 246,235 GWh, 2.3% less than the same period in 2012.

This month a new record of demand coverage using wind power was established when at dawn on the 25th, at 2:56 am, 68.49% of peninsular demand was covered with this generation, surpassing the previous all-time record of 64.25%, registered on 24 September, 2012, at 3:03 am.

Production coming from wind power during the month of December reached 4,771 GWh, 9.9% less than the same period last year, and represented 22% of the total production.

In the month of December, generation from renewable energy sources represented 36.8% of production.

52.6% of electricity generation during the month was obtained using technologies which produce zero CO2 emissions.

Generation mix in the month of December 2013 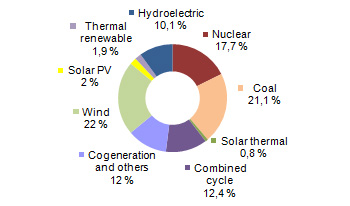 Generation mix from January to December 2013 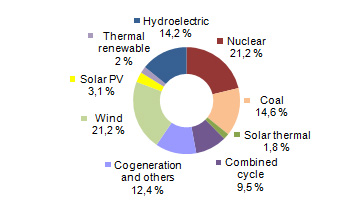