In order to make the energy transition possible, the Red Eléctrica Group, through its subsidiary Red Eléctrica de España, will invest a total of 3,221 million euros nationwide in the development of the high voltage transmission grid and in electricity system operation. This figure represents just over half (53%) of the total investment of 6 billion euros that the Company plans to make in the coming years as part of its new 2018-2022 Strategic Plan and that will focus on the integration of renewables.

Of the more than 3,000 million euros that have been earmarked for the energy transition, 1,538 million will be focused on the integration of clean energy (47%), 908 million on bolstering the reliability of the transmission grids and strengthening security of supply, 434 million will be allocated to continue implementing cutting-edge technological and digital tools, 215 million to boost energy storage projects and 54 million will be earmarked for energy control systems. 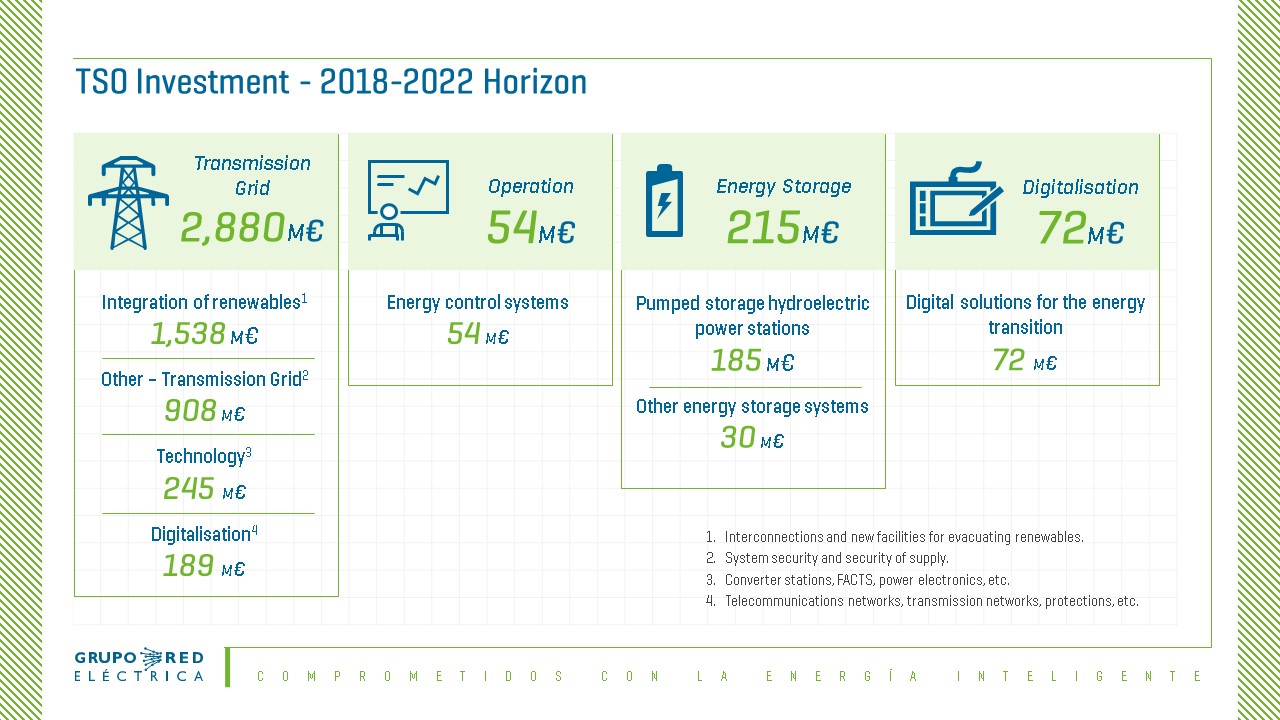 Both as the transmission agent and system operator, we work to respond to the needs of the energy transition, providing the technology that enables a smarter system in order to further guarantee the security and quality of supply with a higher share of intermittent renewable generation, and at the same time be able to manage an electricity system that is increasingly more complex and which makes it possible to integrate a greater number of energy sources distributed nationwide.

With regard to the development and strengthening of the transmission grid, the road map for 2019 onwards encompasses a great number of projects, many of which are already in the implementation phase. Many of them are key for achieving the European Union's targets set out in their energy and environmental policy: for example, the interconnection with France across the Bay of Biscay in order to continue making progress towards reaching the cross-border interconnection capacity target with France set at 10%, or many other projects scattered nationwide focused on integrating new renewable generation and that seek to contribute to achieving a share of 32% of carbon-free energy in the generation mix by 2030. 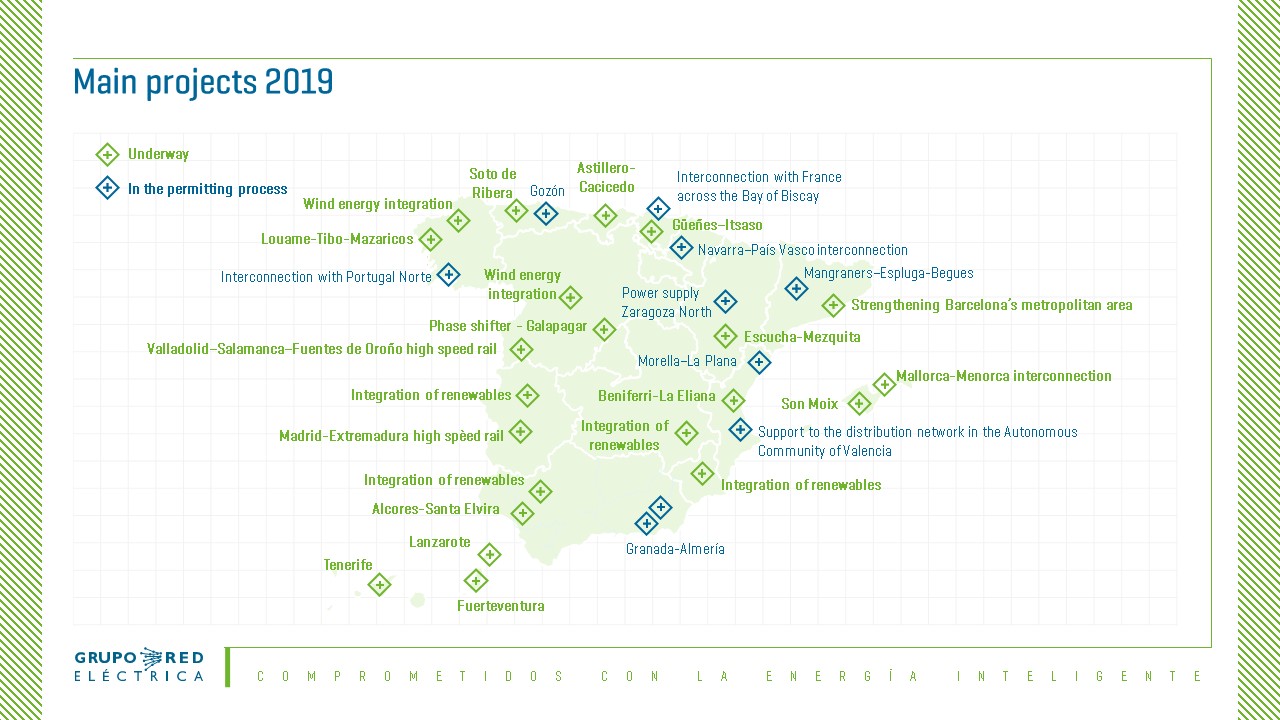 2018 has seen the start of many of projects aimed at facilitating the energy transition. In this regard and with this objective in mind, the total investment made by the Company in transmission grid development in the last twelve months has amounted to 378.2 million euros.

In 2018, some particularly relevant projects were undertaken:

2018 has also brought with it other relevant data that reflect the efforts being made by the Company to help make the energy transition a reality and, in particular, the integration of renewables nationwide. Thus, peninsular electricity generation that produces zero CO2 emissions reached a share of 62.5%, compared to 57% in 2017, representing an increase of 5.5 percentage points. This increase in clean generation resulted in 15% less emissions: going from 63.8 million tonnes in 2017 to 54.2 million tonnes in 2018. With regard to combined cycle and coal-fired technologies, these have decreased their share in the generation mix by 22% and 18%, respectively, compared to the previous year.

Nuclear energy (20.6%) continues to be ranked in the top position within the generation mix, nonetheless, in 2018 it was followed closely by wind energy (19%). As a whole, renewable generation has gone from 33.7% to 40.1% in the peninsular system, representing an increase of 6.4 percentage points. In the complete set of renewable energy technologies, wind represented 49%, hydro 34%, solar 11%, and the other renewable technologies represented 5%. All this data is taken from the ‘Spanish Electricity System - Preliminary Report 2018’ published by Red Eléctrica.

Facilitating the energy transition is just the first of the pillars of the new Strategic Plan of the Red Eléctrica Group. Although the Company is especially focused on this area, in keeping with its key role as transmission agent and operator of the electricity system, there are other goals that it is also undertaking: expanding the telecommunications business to become a strategic global telecom infrastructure operator; expanding its activity abroad in the electricity and telecommunications sectors; becoming a reference in technological innovation in the fields associated with the activities it carries out, and strengthening its operational efficiency and financial soundness.

In order to achieve these goals, the Company will invest a total of 6 billion euros over the next five years based on a balanced business model between the Company’s regulated activities and those operations subject to market risk and by diversifying business in a controlled manner, thereby boosting the expansion of operations in Spain as well as in the international arena. In addition, an improved business structure will be defined and implemented within the Group and the resources of its various subsidiaries will be strengthened. 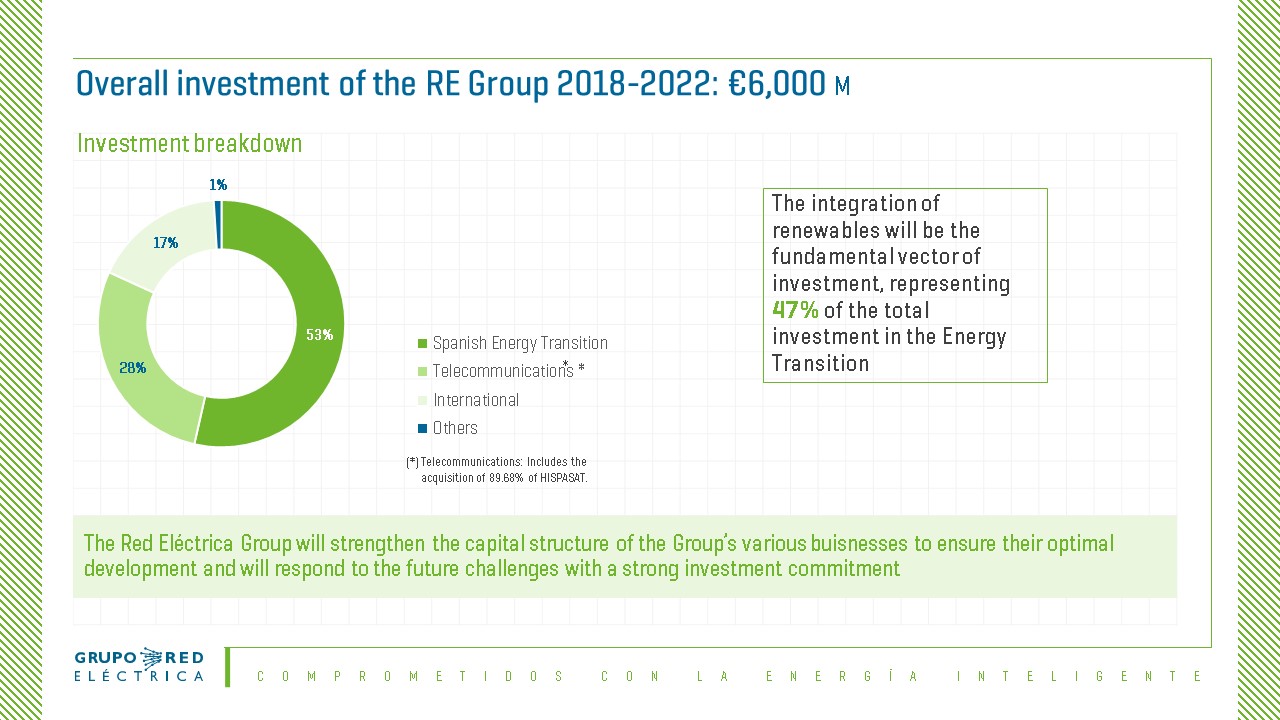 This new Strategic Plan is the Company's response to the challenges posed by the transformation of the production system model, marked by sustainability and the technological disruption. Electricity, telecommunications and talent are considered today as the new raw materials of economic development and are also the distinguishing features of Red Eléctrica’s new strategy.