In largest ever UN-backed CEO-led climate advocacy effort, major multinationals reaffirm their own science-based commitments to achieving zero carbon economy and call on governments to match their ambition

155 companies — with a combined market capitalization of over US$ 2.4 trillion and representing over 5 million employees — have signed a statement urging governments around the world to align their COVID-19 economic aid and
recovery efforts with the latest climate science.

As debates on recovery packages around the world ramp up in the coming weeks, the companies, which are all part of the Science Based Targets initiative, are calling for policies that will build resilience against future shocks by supporting efforts to hold global temperature rise to within 1.5°C above pre-industrial levels, in line with reaching net-zero emissions well before 2050.

The statement comes as governments around the world are preparing trillions of dollars worth of stimulus packages to help economies recover from the impacts of the coronavirus pandemic, and as they prepare to submit enhanced national climate plans under the Paris Agreement. In the coming weeks, several major economies will take key decisions in their recovery efforts, including the European Union Recovery Plan, new stimulus packages from the United States of America and India, and the G7 Heads of State summit in June.

The 155 companies have already set, or committed to set, science-based emissions reduction targets. By signing the statement, they are reaffirming that their own decisions and actions remain grounded in science, while calling on governments to “prioritize a faster and fairer transition from a grey to a green economy.” Policy and spending that incorporates climate targets will reduce vulnerability to future shocks and disasters, create good jobs, reduce emissions and ensure clean air, according to a study from Oxford University.

"Governments have a critical role to play by aligning policies and recovery plans with the latest climate science, but they cannot drive a systemic socio-economic transformation alone. To address the interconnected crises we face, we must work together as an international community to deliver on the Sustainable Development Goals and the Paris Agreement," said Lila Karbassi, Chief of Programmes at the UN Global Compact, and Science Based Targets initiative Board Member. "As the largest ever UN-backed CEO-led climate advocacy effort, these companies are leading the way in driving ambitious science-based action and advocacy to help reduce vulnerability to future shocks and disasters.”

The business voices are convened by the Science Based Targets initiative (SBTi) and its Business Ambition for 1.5°C campaign partners, the UN Global Compact and the We Mean Business coalition. The SBTi, which is a collaboration between CDP, the UN Global Compact, World Resources Institute and WWF, independently assesses and validates corporate climate targets against the latest climate science.

Paul Simpson, CEO of CDP, one of the SBTi partners, said: “The coronavirus outbreak is a stark reminder of the fragility of our current economic system. It also reminds us that science must be our collective guide on the path to a more resilient economy. Setting and working towards science-based targets is the best way for companies and governments alike to protect against future climate-related business and economic disruptions.”

Maria Mendiluce, CEO of the We Mean Business coalition, said: “Governments can be reassured that businesses are implementing science-based targets to get us on a 1.5°C trajectory. They are calling for recovery policies that will boost the economy and build resilience. A net zero aligned recovery will enable companies to invest and innovate at the pace and scale necessary to build back better, creating decent jobs, protecting health, reducing emissions and increasing resilience in the future.”

“It is imperative that we not only restart the world economy – but also reset it. It would be a tragedy if after spending $10-20 trillion of public money we simply rebuild the same unequal, vulnerable and high carbon economy we had before” said Dr. Andrew Steer, President and CEO of World Resources Institute and SBTi Board member. “We applaud the leaders of these 155 companies, who are not only committed to resetting their own companies but are also demanding that the world’s governments act in the light of the best science and best economics which shows that climate-smart policies will create more jobs and stimulate resilient, inclusive
economic growth.” 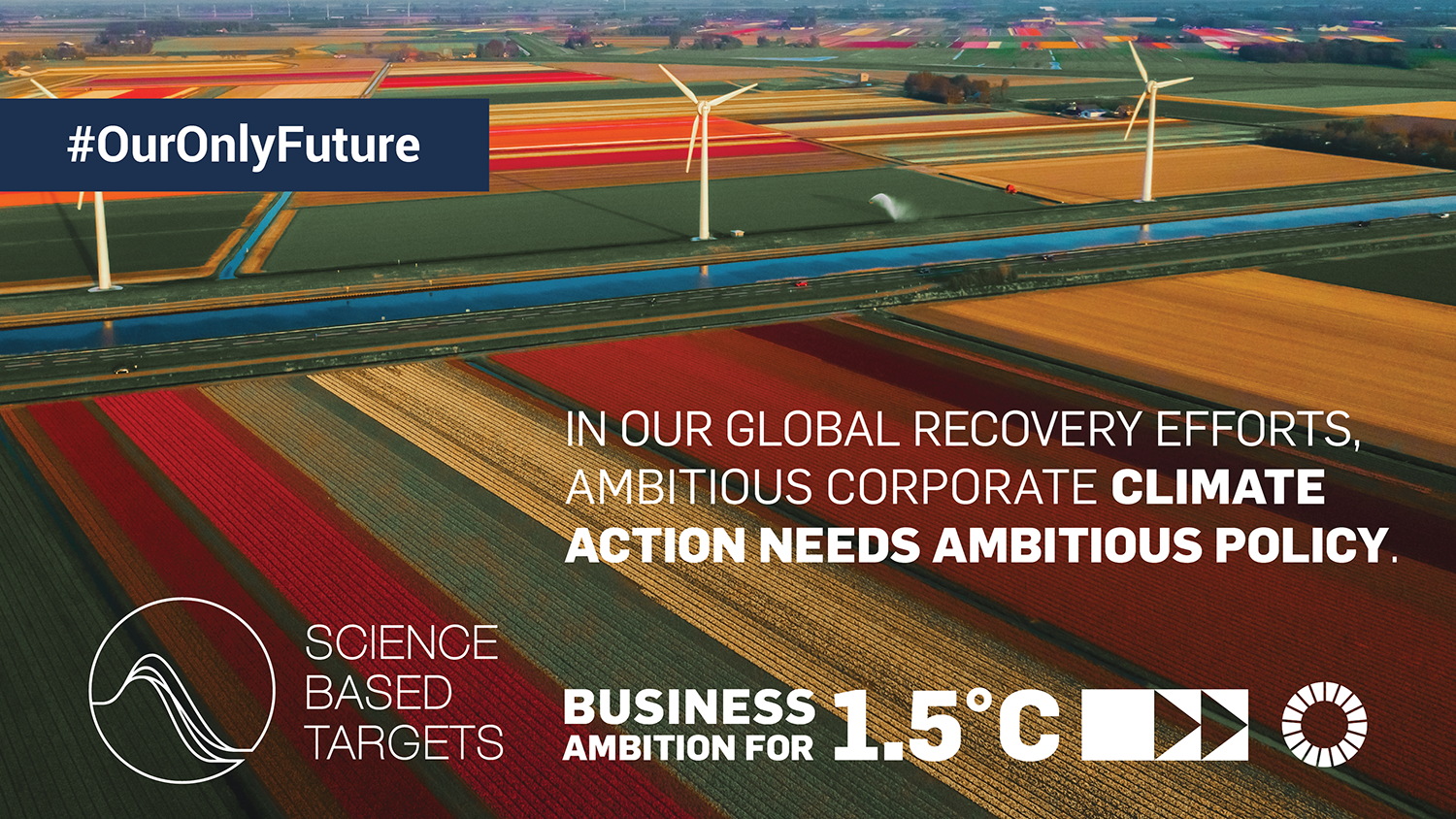 About the Science Based Targets initiative

The Science Based Targets initiative mobilizes companies to set science-based targets and boost their competitive advantage in the transition to the low-carbon economy. It is a collaboration between CDP, the United Nations Global Compact, World Resources Institute (WRI) and the World Wide Fund for Nature (WWF) and one of the We Mean Business Coalition commitments. The initiative defines and promotes best practice in science-based target setting, offers resources and guidance to reduce barriers to adoption, and independently assesses and approves companies’ targets.

About the UN Global Compact

As a special initiative of the UN Secretary-General, the United Nations Global Compact works with companies to align their operations and strategies with ten universal principles in the areas of human rights, labor, environment and anti-corruption. Launched in 2000, the UN Global Compact guides and supports the global business community in advancing UN goals and values through responsible corporate practices. With more than 9,500 companies and 3,000 non-business signatories based in over 160 countries, and more than 60 Local Networks, it is the world’s largest corporate sustainability initiative.

About the We Mean Business coalition

The We Mean Business coalition is a global coalition of nonprofit organizations working with the world’s most influential businesses to take action on climate change. The coalition brings together seven organizations: BSR, CDP, Ceres, The B Team, The Climate Group, The Prince of Wales’s Corporate Leaders Group and the World Business Council for Sustainable Development. Together we catalyze business action to drive policy ambition and accelerate the transition to a zero-carbon economy.