The Salto de Chira hydropower plant is an essential infrastructure in the push for sustainability of the new energy model in the Canary Islands, based on renewable energies.

(Available only in spanish)

This energy storage installation is an effective operation tool of the electrical system for improving supply guarantee, system security and renewable energy integration on the island of Gran Canaria.

The General Directorate for Energy of the Department of Ecological Transition, the Fight against Climate Change and Territorial Planning of the Government of the Canary Islands has issued the administrative authorisation for the Salto de Chira pumped-storage hydroelectric power station project, to be built on the island of Gran Canaria. This is the first major energy storage project in the Canary Islands.

The approval of the preliminary administrative and construction permits, as well as the declaration of Public Utility of the project by the General Directorate for Energy of the Government of the Canary Islands, will allow construction work to begin on the energy storage infrastructure.

The authorised project will take advantage of the fact that there are two large inland reservoirs (the Chira and Soria dams) located on the island in order to build between them a 200-MW pumped-storage hydroelectric power station (equivalent to approximately 36% of the peak demand of the island of Gran Canaria) and an energy storage capacity of 3.5 GWh. Additionally, the project includes the construction of a seawater desalination plant and the associated marine works, as well as the necessary facilities for connection to the transmission grid.

Water will be an essential element for the operation of the new infrastructure, but it is also a scarce resource in the archipelago. Therefore in order to fulfil its mission as an energy storage facility, the project includes the construction of a water desalination plant in the municipality of Arguineguín, which will guarantee the necessary flow in the reservoirs at all times.

What is a pumped-storage hydropower plant?

A pumped-storage hydropower plant is an energy storage installation that has two reservoirs situated at different levels.

During hours with lower electricity consumption, water is pumped from the lower reservoir to the upper reservoir where it is stored and made available for subsequent turbination in periods when energy demand is higher.

Pumping process. In the off-peak energy consumption periods, generally in the early hours of the morning, the surplus renewable energy is used to pump water to the upper reservoir where it is stored as potential energy, to be used in the turbination process. 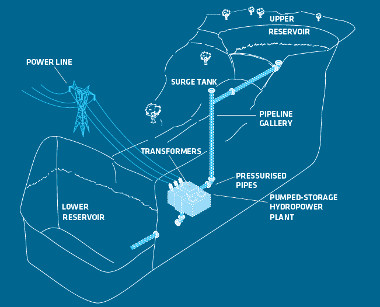 The electric power system of the Canary Islands is made up of six small-sized electrically isolated systems and a network of electricity infrastructure that is weakly meshed. These conditions make these systems less stable and secure than large interconnected systems in which it is possible to guarantee supply at times when peaks in demand occur or when faced with certain situations in which there is a lack of generation, such as the lack of wind required for wind power production or failures and unavailability of grid elements.

To reduce the vulnerability of these electrically isolated systems it is key to incorporate energy storage systems, such as pumped storage facilities, whose main purpose is security of supply and system security and facilitates the integration of non-manageable renewable generation. Similarly, it is essential to develop new interconnections between islands that allow mutual support between systems and help improve the meshing of the transmission grid.

Evolving towards the new energy model in the Canary Islands

The new energy model in the Canary Islands is geared toward renewable energy. The challenges of this evolution towards sustainability are: