For a proper operation of the electrical system is essential to strengthen international interconnections.

In the case of the European electricity system, it is these interconnections which make it not only the largest but the most robust and secure system in the world. The importance of the electricity interconnections is even higher for peripheral countries such as Spain, for which this type of infrastructure becomes an essential element for the development of an adequate system that ensures its needs regarding supply, in terms of quantity and quality, both now and in the future.

International interconnections are the set of lines and substations that enable the exchange of energy between neighbouring countries and that bring with it a number of advantages within the countries that are interconnected.

At present, the Spanish electricity system does not reach the minimum level of interconnection recommended in Europe of at least 10% of the installed capacity. Therefore, the strengthening of our interconnections and, specifically, the new interconnection line with France is priority in the development of the transmission grid.

The commercial capacity (in Megawatts) shows in an indicative manner the most probable margins of exchange capacity between systems and represents the combination of the limitations detected by the corresponding operators of the exchanging systems.

The definite values will be established by Red Eléctrica in the day-ahead horizon.

You may consult the international exchange data regarding recent years in the Spanish Electricity System report that is published annually. You may also find provisional data corresponding to recent months in the Monthly Bulletin (only available in Spanish). 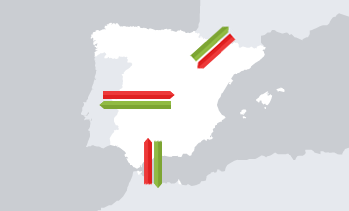 More information can can be consulted on e-sios
IESOE, regional information platform of international electricity interconnections