To perform said functions the Cecoel has the corresponding teams of operators which, under the supervision of the Shift Manager, represent the operational unit called ‘operation shift’, which perform their functions 24 hours a day, 365 days a year.

To ensure the security and quality of the electricity supply, the Cecoel issues the operating orders necessary for the correct scheduling of both electricity production and international energy exchanges in order to be able to manage the variations in demand and the possible unavailability of generating units. Additionally, operating orders regarding transmission grid elements must be issued to keep control variables within the ranges established in the system operating procedures. 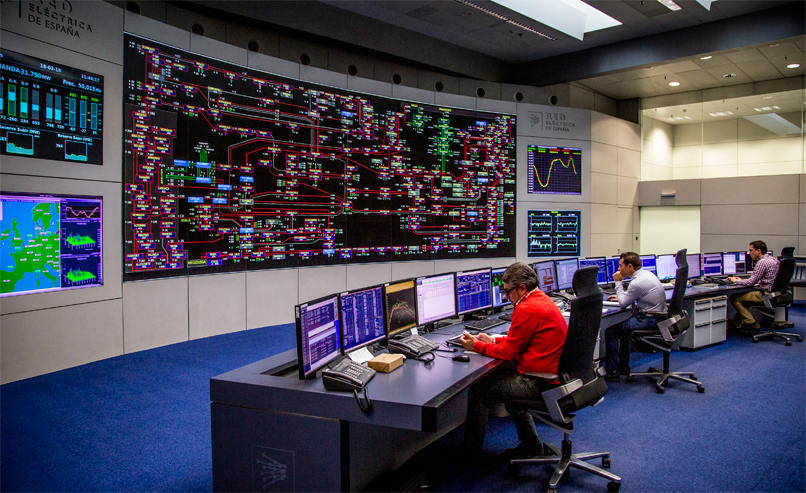 The Cecoel continually controls the state of the grid and its electrical parameters, via a telecommunications network, acting on the control variables with the aim of maintaining the security and quality of supply or in order to re-establish the power service in the event that an incident occurs. Additionally, it manages the real time information received from power stations and grid facilities, providing it to operators in an easily understandable graphical representation so that the actions necessary to guarantee the security of the electricity system can be carried out.

The real-time information regarding the facilities not owned by Red Eléctrica de España is received at the Cecoel from the generation, distribution and consumption control centres qualified by the System Operator, through the real-time telemetry protocols defined in Operating Procedure 9.2 (P.O. 9.2).

Electricity systems of Ceuta and Melilla

Royal Decree 738/2015, of 31 July, regulates the electricity production activity and the dispatch procedure in electricity systems in non-peninsular territories.

The presence of Red Eléctrica in these territories, in addition to being a guarantee of transparency and neutrality in the functioning of these electricity systems, makes the inclusion of other generators and traders possible, thus forming electricity systems that are more competitive and efficient.

Red Eléctrica carries out its functions from the Electricity Control Centre (CECOEL) in a coordinated manner with the control centres of the generation and distribution companies present in both systems. In particular, it is responsible for carrying out, among other tasks, the monitoring the electricity system in real-time, the scheduling of the demand coverage by carrying out of the economic dispatch of the generation units and the real-time management of generation-demand deviations.

Singular features of the electricity systems of Ceuta and Melilla

The electricity systems of Ceuta and Melilla are two small-sized isolated systems and that do not have a transmission grid. These singular features greatly influence the stability and service quality indexes.

Daily balance of the systems of Ceuta and Melilla

The daily balance of the electricity systems of Ceuta and Melilla are included in the Daily Balance section together with the Peninsular Balance.