Every four years, Spain's General State Administration works together with its autonomous communities to draft an energy plan that defines what the electric system will be like in the medium- and long-term. This plan identifies the need to develop new infrastructures that are necessary to ensure the energy supply throughout the country, taking into account aspects of environmental, social and economic sustainability.

How does the transmission grid planning process work?

The planning process is a participatory process conducted by Spain’s General State Administration, its autonomous communities, its National Commission on Markets and Competition, Red Eléctrica de España and all of the sector actors. Society as a whole is also given a say in information and consultation processes.

It is structured into the following six phases: proposals, preliminary studies, debate, studies, consolidation and approval.

See the role each participant plays in the various planning phases here (Available only in Spanish). 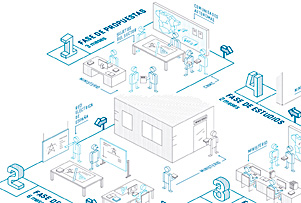 Objective
What is the electrical transmission grid plan? (Spanish Law 24/2013, on the Electricity Sector)

It is the instrument that is used to define the series of reinforcements that must be made in the electrical transmission grid in a given period in order to incorporate the energy policy defined on a national and European level, and ensuring the electrical supply throughout Spain in accordance with the criteria of sustainability.

It therefore defines the new facilities that will be added to the transmission grid and how existing facilities will be reinforced, distinguishing between:

What is it for? What are its objectives?

The main objective of the plan is to design the transmission grid in a way that will comply with the national and European energy policies, and that will secure the country's long-term energy supply, taking into account environmental and economic efficiency criteria. In the current process, the primary objective of the future transmission grid will be for it to be a vector for facilitating the energy transition.

It also includes the actions that will be necessary for stakeholders to connect to the transmission grid that meet the requirements for doing so (large consumers, generators, etc.).

Are demand and generation planned?

Demand and generation are not planned, but indicative forecasts are made to plan the transmission grid efficiently and effectively.

Publication
Where and how is the plan published?

The plan is published digitally on the website of the Ministry for Ecological Transition (MITECO) once it has been approved by the government in the Council of Ministers.

Approval
Who prepares and approves the plan?

The plan is prepared by the General State Administration together with the autonomous communities and the cities of Ceuta and Melilla, and it is approved by the government after passing congress and following a hearing. The Strategic environmental evaluation has to be prepared for it to be approved.

What is Red Eléctrica's role in the plan?

Red Eléctrica provides technical support to the Ministry by conducting the studies that determine where the transmission grid needs to be reinforced and by analysing proposals from the various stakeholders. It uses the results of these studies to prepare the “Initial Transmission grid Development Proposal”, and then it analyses the arguments from the autonomous communities and sends the “Development Proposal” to the Ministry.

How often is a new plan approved?

By law, a plan has to be prepared every four years, and it must cover a six-year period.

Participation
Who participates? How do they participate?
Can any entity or individual participate directly? What are the mechanisms for participating?

Before it is approved, the electric plan must first go through a strategic environmental evaluation process that includes any queries from affected public administrations and stakeholders.

Criteria
How are the criteria defined that facilities that will be included in the plan must satisfy?

New facilities must also meet a series of technical criteria stipulated in the following operating procedures:

Does Red Eléctrica decide which infrastructures will be included in the plan?

No. Red Eléctrica prepares proposals for developing the transmission grid based on energy policy criteria that have been defined depending on the proposals received from stakeholder groups in the process, but MITECO has the final say on which infrastructures will be included in the plan.

Process
Which documents specify how the planning process should be regulated?

How does the process work? What are its phases?

It is a transparent participatory process in which all of the stakeholders from the electricity sector participate, and it also allows for any entities or individuals to participate if they would like.

The process consists of the following phases:

The plan undergoes a strategic environmental evaluation that makes it possible to introduce environmental criteria into the decision making process in an incipient phase, pursuant to Spanish Law 21/2013, December, 9.

Attainment of the plan
Can transport infrastructures be built that are not specified in the planning process?

No, although certain work may be performed to modify existing infrastructures.

Who is in charge of authorising projects after the plan is approved?
What happens if the plan is not attained?

Since the plan is mandatory, the facilities specified in it need to be built. However, there may be reasons that make it impossible to build certain facilities: physical, environmental and economic reasons, or due to the relevant stakeholders quitting. In these cases the plan will need to be adapted using the methods specified by law.

Why are some infrastructures listed in successive planning documents?

This may occur for various reasons: on one hand, the reason for building a facility may be delayed, with this making it economically inefficient to build the facility earlier; on the other hand, since the plan must be approved every four years, it may be impossible to build certain facilities in such a short timeframe.

Modification/adaptation of the plan
Is the plan a static or a dynamic document?

It is a live process that is continuously changing; that is why there are tools for updating it.

What type of mechanisms are there for modifying the plan?

There are two ways to modify the plan: