Red Eléctrica de España, S.A. was founded in 1985 in application of Law 49/1984 of 26 December. It was the first company in the world exclusively dedicated to the transmission of electricity and the operation of the electricity system.

Red Eléctrica is created as a company with a majority of public capital, made up of capital contributions of a group of public electric utilities (Endesa and ENHER) and private electric utilities (Iberduero, Hidroeléctrica Española, FECSA and Unión Fenosa, amongst others). The INI (Instituto Nacional de Industria), the predecessor of SEPI (State-owned Industrial Holding Company), held a direct shareholding of 1%.

The Company started off with a workforce of 93 people and 10,500 km of high voltage electricity line provided by the electric utility companies. At the head of the company, a woman, Paulina Beato, who was the chairwoman until 1988. 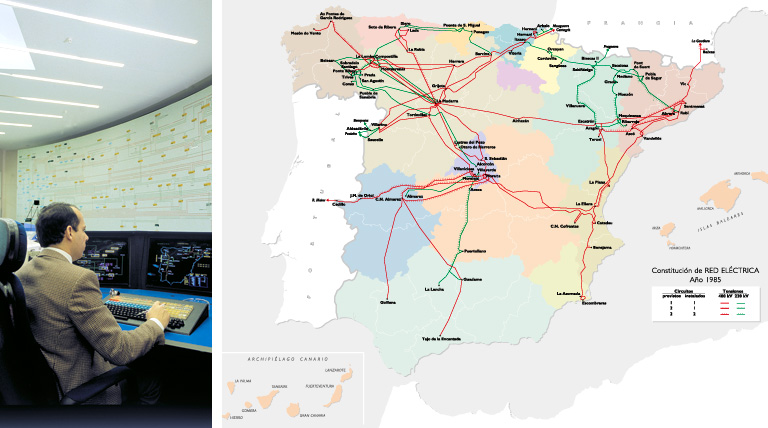 The first control centre display panel of Red Eléctrica in Madrid. Map of the transmission grid map in 1985.

Five years after its founding, the workforce had practically grown tenfold, and 1990 became a landmark year for boosting international energy exchanges. 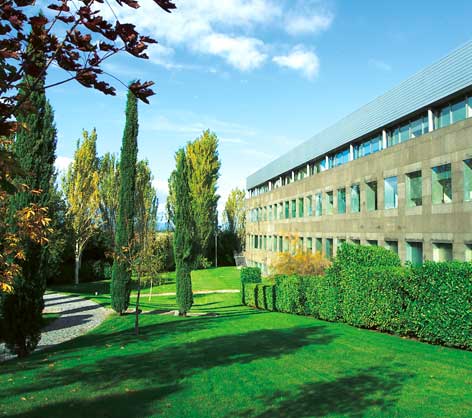 These are the years of consolidation of Red Eléctrica, in which the Company faces numerous challenges: taking control of the acquired HV grids, the development and expansion of the transmission grid, the signing of several electricity supply agreements with neighboring countries, the construction of the new buildings (head office and regional head offices), the development of optical fiber or the Spain-Morocco submarine interconnection, the first between two continents.

In 1997, Law 54/1997, regarding the Electricity sector, is passed ratifying the functions of the Company and confirming its role as key player in the operation of the electricity system.

During this period (until 1997) the Company is chaired by Jorge Fabra.

This decade is characterised by the IPO, in July 1999, of an important part of the share capital of the Company, which puts the Company on the road to privatisation.

Following the IPO, in this decade changes occur in the Company shareholding, which will eventually reduce the share capital of the public administration, in other words, that of SEPI (Spanish State-owned Holding Company) to 20% and the left over 80% remains as free float. In addition, the Company begins trading on the selective IBEX 35.

In this period, the Company's international expansion also begins with the investment in the Peruvian company REDESUR. It is the first step in the founding of Red Eléctrica Internacional (2001), subsequently the Bolivian company "Transportadora de Electricidad" (TDE) is acquired. 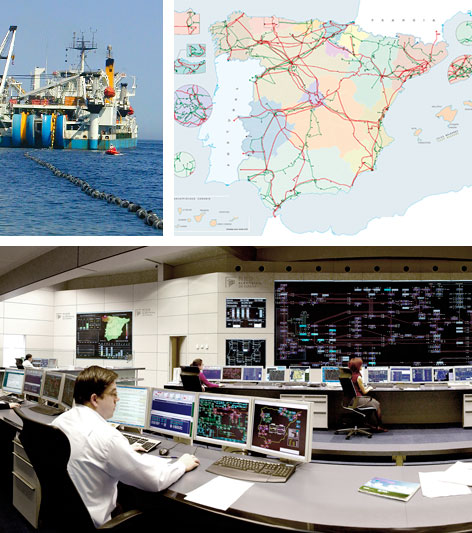 At a national level, work regarding renewable energy becomes ever more relevant during these years, therefore the Cecre (Control Centre of Renewable Energies) was created in 2006, a pioneering centre for the control and integration of renewable energy. This same year, the Company commences its role as operator of the electricity systems in the Canary Islands, the Balearic Islands, Ceuta and Melilla. In 2007, Law 17/2007 is passed, which converts Red Eléctrica into the sole transmission agent and operator (TSO) of the Spanish electricity system.

During this period, some major international interconnection projects are undertaken, such as the installation of the second submarine interconnection cable with Morocco. In 2008, INELFE is created, a joint venture 50% owned by Red Eléctrica and 50% by the French operator (RTE), in order to carry out the new electricity interconnection with France.

In 2010, the process of acquiring the transmission assets pending assignment by the power companies that began in 2002 is finalised, definitively establishing Red Eléctrica as TSO.

Following the asset acquisition, in 2011 the Grid Asset Improvement project is implemented to adapt island facilities to the quality standards of mainland infrastructures.

In 2012, the milestone of the Peninsula-Balearic Island electricity interconnection—a global benchmark for its uniqueness and technical complexity—is reached. In May 2012, the company suffers the nationalisation of the subsidiary TDE (Transportadora de Electricidad) by the Bolivian government.

In November 2014, the company acquires the assignment of rights and the use of ADIF’s commercial fibre optic network for the next 20 years. This diversification operation makes Red Eléctrica a neutral and independent operator in this segment of the telecommunications market, assuming a role similar to the one it performs in the electricity sector.

On 13 November 2014, a definitive agreement is reached with the Bolivian government for economic compensation following the nationalisation of the company TDE.

In 2015, the milestone of the Spain-France underground interconnection is achieved, a pioneering project that doubles the electricity exchange capacity between France and Spain. In addition, two new subsidiaries are created: Reintel (Red Eléctrica Infraestructuras de Telecomunicación) to provide telecommunication services, and Reincan (Red Eléctrica Infraestructuras en Canarias) to promote energy storage projects, like system operator tools, in the Canary Islands.

Internationally, in 2015 the company establishes its presence in Peru with new line concessions, and enters the transmission business in Chile.

Red Eléctrica has a workforce of over 1,700 employees and manages more than 42,000 km of power lines.

José Folgado has served as chairman of Red Eléctrica since 2012.

On the international front, in Chile, Red Eléctrica Chile has formalised the acquisition of 50% of TEN. The company has also expanded its presence in Peru, where it owns Red Eléctrica Andina (REA) and Red Eléctrica del Sur (REDESUR), thus managing more than 1,300 km of circuit.

In the field of energy storage in the Canary Islands, the permitting and public disclosure processes for the Soria-Chira pumped-storage hydropower station have begun. This new facility is an essential element in the advancement toward a more sustainable energy model in the Canary Islands.

In 2016, the process of fully decoupling the powers of the company Chairman and those of the CEO, Mr. Juan Lasala Bernad, was finalised.

In early 2019, Red Eléctrica Corporación (REC) has reached an agreement with Albertis Infraestructuras, S.A. whereby REC, through its subsidiary Red Eléctrica Sistemas de Telecomunicaciones (RESTEL), acquired 89.68% of the shareholding of Hispasat S.A., for an amount totalling €949 million. By means of this transaction, the Red Eléctrica Group consolidates itself as a global operator of strategic infrastructure both in Spain and abroad, not only through the management and operation of electricity transmission grids but also of fibre optic networks and satellites.

In May 2019, the Board of Directors of Red Eléctrica Corporación has agreed to appoint Roberto García Merino as the new CEO of the Group and has approved the creation of the new technology company of the Red Eléctrica Group (Elewit).

In January 2020, Red Eléctrica Corporación, S.A.’s Board, in the meeting held on 28 January, recorded the irrevocable resignation tendered by Jordi  Sevilla Segura from his directorship and, as a consequence, from his position as non-executive chairman of the Board and of the Company.

The Board of Directors of Red Eléctrica Corporación, S.A., at its meeting held on 25 February 2020, has adopted the appointment Ms. Beatriz Corredor Sierra as Director of Red Eléctrica Corporación, S.A., in the category of “other external” directors, until the first General Shareholders' Meeting is held, in order to cover the vacancy existing on the Board of Directors as a result of  the resignation tendered by  Mr. Jordi  Sevilla Segura.

In 2020, the Group begins its electricity transmission activity in Brazil and in 2022, work begins on the Salto de Chira, the first major energy storage system in the Canary Islands.

In June, 2022 Grupo Red Eléctrica has a new identity, Redeia. 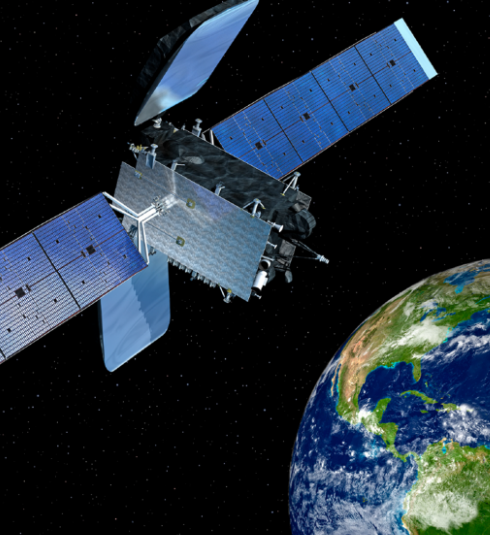 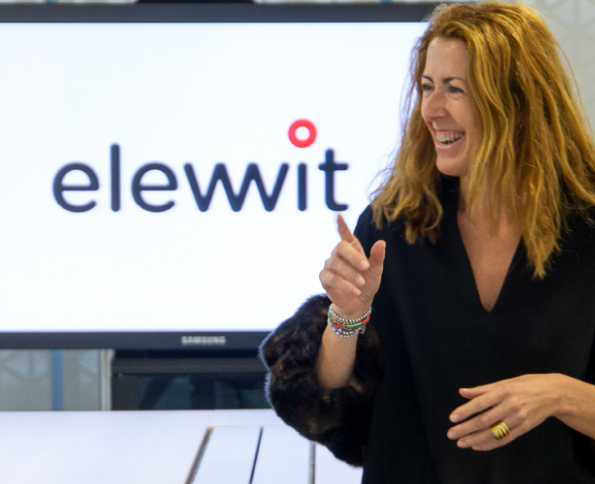